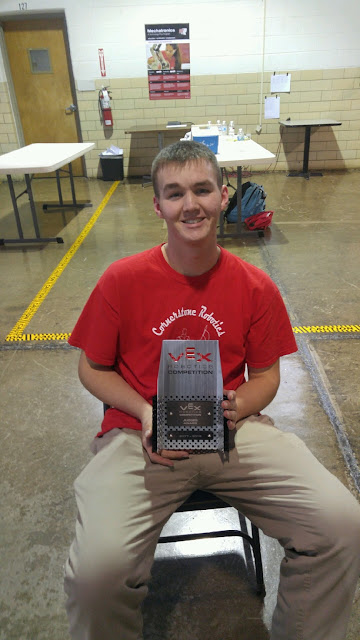 Therefore, since we are surrounded by such a great cloud of witnesses,
let us throw off everything that hinders
and the sin that so easily entangles.
And let us run with perseverance the race marked out for us,
fixing our eyes on Jesus,
the pioneer and perfecter of faith.
Hebrews 12:11-12

May I introduce my grandson, Jack Foster.  Jack is in tenth grade at Cornerstone Christian Academy in Morristown, TN.  Jack doesn't compete in sports like football or basketball or lacrosse.  Jack's sport is robotics.

I have to tell you...I had to look it up.  His mother finally told me to go to You Tube and I could see kids doing it.  Robotics is defined as the branch of technology that deals with the design, construction, operation, and application of robots.  Jack programs and directs robotic items to perform specific skills.  He is on his school's robotics team.  Home schooled until ninth grade, Jack is an A student.  He is also active with the youth program in his church.

And he's a winner.

In our culture, trophies and awards are the holy grail of so many activities.  Receiving some item that represents your field of endeavor is the affirmation that makes all your hard work worthwhile.  Sometimes, the trophy means you're the winner...the champion.  In recent days, we've seen football players hoist the Lombardi trophy for winning the Super Bowl.  The winter Olympics are currently giving us medal winners every day...simple metal circles of gold, silver or bronze hung around the necks of those who were fastest or most adept at their sport.

But then there are trophies of another kind...awards of excellence.  That's the kind of award Jack received at his most recent robotics competition.  The trophy he holds so proudly is the Judges Award.  It's given to the person who most personifies the mission of the program.   This is a high honor.

What more can we ask for Jack but that he run with perseverance the race marked out for him with his eyes fixed on Jesus.  He is making a good start and he is being rewarded for his efforts.

And his family is proud of the amazing young man he is becoming.