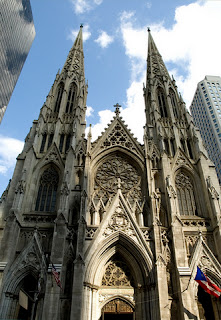 It was the day before the September 11 tenth anniversary. Financier Donald Marron was being interviewed by a television anchorman. The question was the same one being asked of everyone: where were you that day?

He was in his office, Mr. Marron replied, and from his windows he could look in one direction and see the . In the other direction, he had a view of St. Patrick’s Cathedral. Both of these landmarks were important places for him. As he watched, the towers of the trade center sank from his view.
And then, he said, he turned his gaze to St. Patrick’s. It was standing.
Soli Deo gloria!
Newer Post Older Post Home