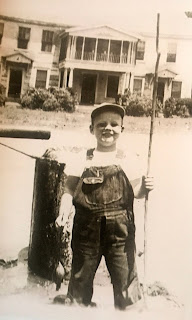 I made a new friend last year. Beth Redman Kray thinks in rhyme and she has the talent to give breath to the most mundane little pieces of life. At the urging of her friends (thank you, friends!) she published her first book of poems, Life Song, in 2020.
As she began to post a few on Facebook, I started asking around. Who is this gal? It turns out that we grew up on the same street although she was a few years behind me. We are two Vero gals, who now enjoy sharing coffee and chats at our favorite place, Coffee House 1420...formerly the Rexall Drugstore on the corner of 14th Avenue and 20th Street.

The poem that I share here with Beth's permission grabbed my spirit because I have had this same thought. She had the gift to put it on the page.
As the grandmother of three boys, I leave it here with prayer.

Someone's Little Boy
He yelled, "You're just a piece of trash!
Go on! Get outta my face!"
The homeless man just turned around
to find another place.
As he stumbled off I thought,
how did he end up here?
He once was someone's little boy.
What happened year to year?
And what about the angry man
whose tolerance was gone
and left him blind to only see
a bum to spit upon?
He too was someone's little boy.
What happened year to year
to fill his heart so full of hate,
his mind so full of fear?
As all God's children, they were made
with souls behind that clay,
and so I thought, where lies the blame?
What led them each astray?
When I got home I hugged my boy
and said a fervent prayer
that he would never meet such fate
as I had witnessed there.
—Beth Redman Kray, from Life Song
Newer Post Older Post Home