The Lord is my light and my salvation—whom shall I fear?

The Lord is the strength of my life—of whom shall I be afraid?

Mother's Day last week seemed to bring forth more than the usual number of reflective stories about the strong women who were so much a part of the settling of early Florida.  Indeed, Florida around the turn of the last century was no easy place to be.  Sand and sandspurs were as far as the eye could see.  Name a critter and it was likely here.  Think of a flying pest or a creepy crawly bug on the ground or in the trees or lighting on your arm or leg...you would likely encounter it among the pines and palmettos.  And then there were the real scary crawlies...snakes and alligators roamed freely.  In short, it was not an easy place to be.  In fact, one of my forebears arrived in Florida, basically took a look around and went back to civilized Virginia!  But not the lovely lady in the picture.

The young woman in the picture is my paternal grandmother, Carrie Chesser Kennedy.  Her story is included in my book Faith Breezes: Glimpsing God's Glory in Everyday Life.  She was born in Accomack County on Virginia's Eastern Shore.  Always frail because of her severe asthma, she was miserable in the climate of that peninsula between the Chesapeake Bay and the Atlantic Ocean.  When she was a young teenager, the doctors told her parents that if she didn't get to a better climate, she likely would not survive to adulthood.  So she was moved to Florida to live with relatives in what is now Indian River County.   She was a Florida pioneer because she had to be.

Her doctors would have been amazed to know that she lived to the age of 65.  She married my grandfather and gave birth to six children, five of whom survived to lead full adult lives.  On her birthday in 1929, as the horror of the Great Depression began to grip the country, her husband died.  She was left with five offspring ranging in age from 14 down to 7.  They had the house they lived in, 20 acres of grapefruit and the fish in the nearby Indian River.  I'm told that whenever there was a crisis, her first response was to start a pot of grits cooking on the stove.  Whatever was happening, her family would need to eat.  Those grits were a staple in her household and a symbol of the practicality with which she approached life.  The grits accompanied the many pans of fish her sons brought home from the river.

In these days of stimulus money from the government coffers, I have thought of her and how she must have been creative to keep her family going.  A widow living with children in the Florida of the 1930s had to be tough and able to stand up for herself.  Our family's trove of stories about Carrie speaks to her resilience.  Some struggling families received government assistance  during those lean Depression years.  As my father remembered, Carrie was told they were ineligible because they had a grove.  A grove producing grapefruit that nobody had the money to buy.  It was a bitter memory. 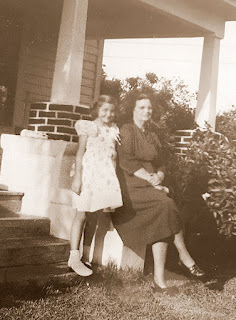 Her life was so full of losses and hard times that she must have stirred up many pots of grits!  But the memories I have of her, as her oldest grandchild, are of a pleasant, loving lady.  I remember a self-controlled woman who sang the old hymns of the church as she went about her daily chores.  From the songs she sang, I know she was a woman of faith who appreciated the natural world around her.  She could grow anything and especially enjoyed working with her rosebushes.  What a gift it was to my life to spend time with her!

(It is always my hope that by sharing my memories, they may spark yours.  Read more about my family in Faith Breezes: Glimpsing God's Glory in Everyday Life, available on amazon.com.)