The Crepe Myrtle is Blooming 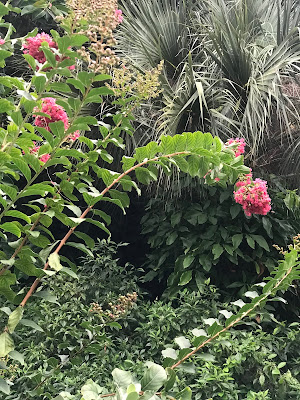 The earth is the Lord's, and the fullness thereof...

It was a down moment. Too much time in the house in the midst of home projects and books to read and things to write. I could hear thunder in the distance. Through the windows, I could see the storm clouds beginning to circle, just like the allergies in my head. My TV was dark because I'd had enough news about viruses and protesters and politics. Unrest in the atmosphere as well as in the culture is the formula for a full-blown headache! Escape...that's what I wanted.

I escaped to my yard and it was the best thing I could have done.

Breathing the fresh air, I let my eyes take in all the vivid colors that Florida offers...the lawn and the leaves so green, the flowers so red and yellow and orange. A brown squirrel fluffed his tail and sat up on his bottom as if offering me the acorn in his paws.

Somewhere in the distance, the thunder still rumbled. It seemed the storm was taking a path to the north of us giving me the pick-up my spirit craved. "Faith breezes," I chuckled to myself, as the comforting wind ruffled my hair. The birds in the trees above my head were loving it. Some were singing, some were chirping, some were sending happy caws to their buddies.

As I walked from front yard to side yard to back yard, I took note of the variety of activity right there in my yard. The marigolds and petunias Ed and I had so carefully potted for the front patio were in the throes of death, in spite of all I had been able to do. The kalanchoe, on the other hand, was thriving and grateful for the recent rains. The white bird of paradise, high above my head, sported two blooms—one at the end of its cycle and the other about to pop full out.

The azalea bushes, which just two weeks ago had a severe cutback, were already covered with healthy green leaves.

It was the back yard that gave me my messsage. I noticed, as if for the first time this year, that the crepe myrtles are blooming. How many times, I wondered, have I looked out the windows and barely noted the beautiful summertime blooms on these bushes. Today, they preached a sermon. There they were, blooming right on time, as if telling me "It is summer. We will bloom until fall."

All kinds of things will happen on this Earth. There might be sickness and discord among the people, but the Lord says that the Earth is his. The things on it will come and go in My Time. I created this place and I will take care of it.

I created it for you, but it's not about you, dear girl. It's about Me.

"For everything there is a season, and a time for every purpose under heaven," says Ecclesiastes 3:1.

Back inside, I began the preparations for our supper and turned on the TV. The news was no better than it had been earlier, but I felt I should at least be aware. Outside, the storm winds were once again swirling rain against the windows...God's world in action.

The Earth is the Lord's.

And the crepe myrtle is blooming.