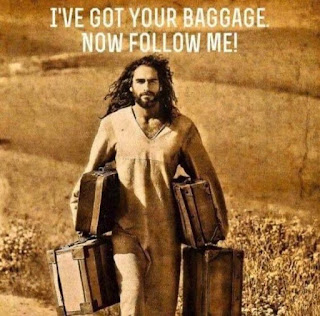 And now, compelled by the Spirit, I am going to Jerusalem, not knowing what will happen to me there.  I only know that in every city the Holy Spirit warns me that prison and hardships are facing me.  However, I consider my life worth nothing to me, if only I may finish the race and complete the task the Lord Jesus has given me – the task of testifying to the gospel of God’s grace.   (Acts 20:22)

Looking back at messages given to Ladies Lunch at Vero Beach FUMC in years past, I came across these words.  Fear...courage...trust.  They are issues for many of us.  As we turn the calendar to a new year, there will be challenges.  Some are continuing, some will be new.  All will produce their own fears and difficulties.  Perhaps the Apostle Paul will inspire us.

This is Paul’s farewell to the elders of the church at Ephesus.  He spent three years there during which time he preached Jesus every waking moment and shared the Holy Spirit with all the converts.  Acts 19:11 and 12 says: God did extraordinary miracles through Paul, so that even handkerchiefs and aprons that had touched him were taken to the sick, and their illnesses were cured and the evil spirits left them.  What an amazing legacy!

Along with the wonders, there were horrors.  It was a constant battle with the occult.  The threat of death was constant.  He constantly preached Jesus to Jews and Greeks alike.  But his time had come to move on to Jerusalem.  He wanted to be in Jerusalem for Pentecost.

This paragraph from his farewell to the Ephesian elders shows us so much about Paul’s faith and his spirit.  He tells them “I am compelled by the spirit to go to Jerusalem having no idea of what I’m facing there.”  Based on his life up to this point, it’s reasonable for Paul to realize that the obstacles and persecutions are not going to stop wherever he goes.  The gospel he preached was volatile.  It upset people’s lives.  It often stepped between them and their money.  It divided families.  It made them deny their lifelong religious beliefs.  Just as Jesus was, Paul was a divider.  He was also the voice of the greatest hope the world has ever known.  And thankfully he was surrounded by those who had grasped the truth that he preached without failing every day.

A major thing we see about Paul as we have made our way through Acts is that he constantly preached the message of Christ…the same message almost word for word…every time.  At the point of today’s passage, he had been in Ephesus and the surrounding area for three years.  This was likely as close to a comfort zone as he came.  Now, he was being compelled by the Holy Spirit to move on.


Compelled.  Have you ever been compelled to make a move that pushed you out of your comfort zone?  Is there something you are –or have been- led to do in your life that is so fearful to you but you know you will have no peace at all until you obey the prodding of the spirit?  You finally deal with your fear and make your move, all the way telling God “you know I don’t want to do this.  I’m scared to death.”

Now, in our lives we probably aren’t facing probable jail or death.  But we could be putting ourselves out there with the strong possibility of persecution.  Or humiliation.  Those who are anti-Jesus are becoming more and more outspoken.  They laugh at us and poke fun at our beliefs.  And that stokes fear in our spirit.  And if we have this gut gripping fear, is this truly from God?

In his book The Dream Giver, Bruce Wilkinson says this is Misconception #1 about moving beyond your comfort zone.  We’re not going to make much progress if we allow fear to stand in our way.  Misconception #2 is:  I can’t go forward unless God takes my fear away.  We do have fears that protect us…like fear of snakes or bad people with guns.  Our inner sense says “steer clear…move away!”  But the fears that inhibit us...the ones that hold us back from doing the work God would have us do...those are the fears we are called on to walk through with courage.  Courage is not the absence of fear...it's choosing to act in spite of the fear.


As Paul knew from his life, there is always another comfort zone, another fear to be challenged.  Always another city, another prison, another hardship. At this point in his life, Paul in his self had diminished so much and Christ had taken hold of so much of him that his only thought was to continue on with the race he had been given.  Though he always supported himself with his tent-making, he never stopped carrying the message that sustained his life…and gives so much meaning to ours.

Fear…courage…trust.  It all boils down to trust.  Do we trust the proddings of the Holy Spirit?  Can we put our fear into some special place in our heads and walk on through the fear, guided and propelled by this third entity of the Trinity?  He is, after all, the comforter Jesus promised before he left us.

I want to close with some words from noted theologian Henry Blackaby.  In his book Experiencing the Spirit: the Power of Pentecost Every Day, Blackaby says this:

My prayer for us is that we will be watching.