A Moment of Caroling 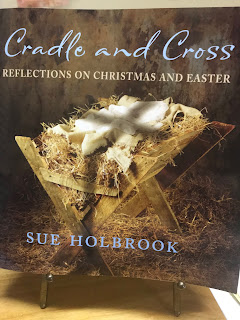 With Christmas just a few days away, I'm excited to share an excerpt from my latest book, Cradle and Cross, which is now available on Amazon.com and by order at your local book store.

Does caroling fit into your holiday plans?  Here's how it went in our family.

Caroling We Will Go!


O come let us adore Him, Christ the Lord!


The words came from our littlest grand, Nathaniel.  He was 7.  He had looked up from his plate as he finished his Christmas dinner and blurted out his thought.  My daughters, his sister and I were all still sitting at the table, relaxing in that lull between a huge meal and dealing with the kitchen.  We stared at each other.  Where in the world had this idea come from?  We had never talked about caroling.  What did he know about caroling?


As is his practice, he kept on…with determination.  “Come on…we need to go caroling down the street.  It’ll be fun.”  And we could think of no reason why not.  We live at the end of a short street with little traffic…a nice setting for a happy activity.  Becky called her friend who came right over with her children and a group of ten of us headed out.  Left that kitchen in total disarray and went caroling.


As we made our way from house to house, I teared up at the reception from our neighbors.  Several came to the front of their homes when they heard our voices, opened doors and windows and came out to greet us with big smiles.  It was a first for my small neighborhood.


What makes this story even more special is that Nathaniel is deaf.  He has two cochlear implants which enable him to hear and we are so thankful for that.  At the time of this story, he had just received his first implant after wearing a hearing aid for two years.  And he was bugging the doctors to give him his second cochlear.  He got the second implant a month later.  When his mother became emotional before the first implant surgery, his reply was simply, “Mommy, I just want to hear.”


And so he marched happily down the street that night, with a smile that would light up Times Square, singing Christmas carols for my neighbors.


We came to adore Him…Christ the Lord.