Sing We Now of Christmas! 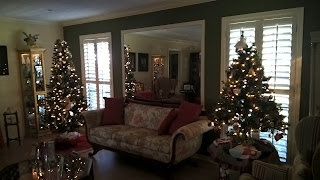 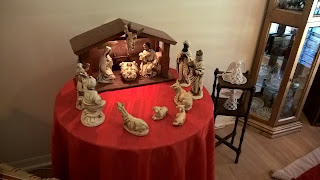 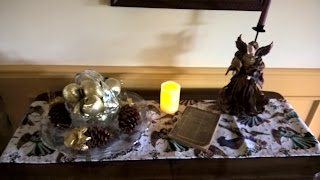 It was Friday night before Christmas...Christmas Eve eve...and all were finally gathered at my home.  Both daughters and their families - ten of us - were busily filling ourselves full of pork loin, scalloped potatoes and sautéed veggies.

It was Nathaniel - the youngest grand - who spouted the thought.

"I want to go caroling!"

We looked at each other with surprised amusement.  Is this something he saw on TV?  Do people really just spontaneously go caroling anymore?  What an unusual thing for a little boy to say.  After all, he's only seven years old.  The thing is...once the idea is in that head, it is not easily removed.
He kept on.

OK, the rest of us finally relented.  We will go caroling down the street.  We picked up our LED candles - thank heaven for modern technology - and headed out to the street.  By now, we were joined by several friends.  Our party numbered ten - moms and kids and one dragging granny.  And our voices floated on the night air across the homes of my neighborhood.
It was really quite lovely.

And the neighbors who were at home to hear us were delighted.  They opened their doors or came to their windows and gave us their own greetings.

As I huffed and puffed my way back to the house and the mound of dinner dishes waiting, it felt good.  Sometimes its the things we haven't planned...those spontaneous joys...
that make the season bright.

"And suddenly, there was with the angels a multitude of the heavenly hosts,
praising God, and saying: