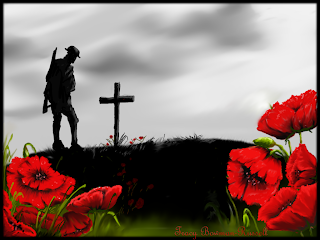 A comment from a friend reminded me recently of a day long ago when I wore a poppy on my shirt.  My mother gave the old man a few coins and took one for each of us from the bundle in his hand.  "It's to honor the soldiers," she explained.  "It's Armistice Day."

In later years, I learned the meaning of Armistice Day, which has now become Veteran's Day.  It's now set aside to honor those who fought in all the wars.  But that first day of remembrance was set to mark the end of The Great War...the one that was supposed to be the war to end all wars.  It was a terrible time in history and more than 9 million soldiers perished in the bloody fighting that raged across the European terrain.  It was decreed to end on the 11th hour of the 11th day of the 11th month.  For years afterward, veterans sold bright red paper poppies to commemorate the price paid by so many.

One of the most touching war poems ever written was penned by Major John McCrae in May, 1915.  The major was a doctor serving in the field in Belgium.  This doctor had seen more horror than he ever could have imagined. His dear friend was now among the dead.  I include his words here as my tribute to those who lie beneath the poppies in Belgium...and to all fallen soldiers everywhere.