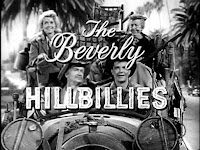 I have discovered a new mission in my relationship with my grandchildren.  I have to be the one to break through the "techno wall" and show them the good things from the past.  They have to have someone to tell them that being mesmerized by strange cartoon figures fighting on a screen is not the ultimate in entertainment.


They got their first installment of this news during the summer when they stayed with me for a few days.  After losing their attention time and again to Transformers and Pokemon and who knows what other imaginary characters, I had had enough.
Thankfully, I had my own ammunition.
After dinner one evening, I waded into their consciousness and took control.  It wasn’t easy.  They don’t go down without a fight.
“I’ve got something I want us to watch tonight! Tonight, we’re going to watch something with REAL people in it.”  With that, I inserted my DVD and those boys embarked on a new video journey…with the Beverly Hillbillies.  Within minutes, they were laughing at the black and white images of Jed and Granny, Jethro and Elly Mae.  When that episode was over, they begged for more.  It was my most successful venture in recent memory.
I didn’t just stop with Beverly Hillbillies.  Since then, I’ve made them acquainted with The Lone Ranger, Gomer Pyle and The Addams Family—the latter, surprisingly, their least favorite, at least for now.

My next find has to be Green Acres.  I know they’ll fall in love with all of those zany characters and the pig.  Especially since there’s a real live counterpart to living directly across the street from them.

I mean…how many houses have you ever seen with a ramp leading from the front porch to the yard so the pig can go in and out?