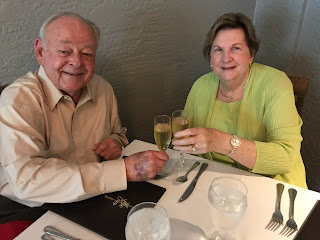 From there to here, from here to there,

Anniversaries elicit memories.  Some are wonderful, some are painful, and a whole lot are just plain funny. June 10, 1967 saw us plighting our troth and saying our vows at First Methodist Church, Vero Beach, FL.  It has been 55 years of the stuff of life and we're still here.  Like Dr. Seuss says...

This morning in church, I was reminded of my Great-Aunt Esther and the part she played in our getting married.  I was reminded because our first hymn was Lily of the Valley.  Now what does that lovely old hymn have to do with Aunt Esther?  She was a giving soul and looked for ways to be generous to her nieces and nephews.  For some reason, she wanted to take me to Orlando in the days before I was married.  Since she didn't drive, I was the driver.  I can't recall our wedding-related Orlando errand, but we had a good day and headed home in the late afternoon.  Apparently, Aunt Esther determined that I might be getting sleepy and needed something to keep me awake.  So she sang...loud enough to scare the cows...along the two-lane highway through the marshes and meadows of Central Florida...just to keep me awake.  She didn't have the greatest voice, but it was intense and joyful.  And she gave a rousing rendition of a dozen or so choruses of "He's the lily of the valley, the bright and morning star, He's the fairest of ten thousand to my soul."  That was 55 years ago, and I'll never hear that song without hearing Aunt Esther.

Aunt Esther starred in another of our wedding funnies.  As I said, she was a generous and hospitable soul.  The day of the wedding, since all the female wedding party participants were being treated to a fancy lunch, she invited the men to her home for lunch.  I've often wondered what she fed that batch of down-home Florida Cracker men since one of her always-on-the-table items was tomato aspic but I never thought to ask.  It was such a lovely gesture.  She knew that men often played jokes on the groom so she offered Ed the use of her barn for storing his car on wedding day.  It would be safe and sound and no one would ever think to look there...right?  Well, only if she gave them the key.  Not only was it decorated, but something was amiss with the motor.

We made it through the day and met up at the altar at 7:30.  By candlelight.  Whoever was in charge of obtaining the candles neglected to buy the no-drip kind.  But they put wax paper underneath the candelabra so the floor wouldn't get messed up with dripping wax.  About halfway through pledging our faith, the candle wax began to hit the wax paper...like shots from a BB gun...intermittent little drops of mirth.

My poor mama finished her part of her only daughter's wedding day with drops of another kind.  She got home ready to collapse but she realized she had left some very important items at the church.  Nothing to do but go back and get them so she jumped into the most easily accessible car in the driveway...MY car... and headed through the dark of night.  Retrieving the items, she once again headed for home and rest...only to run out of gas.  In the rain.

(Find me online at www.sueholbrook.com. Your comments are always appreciated.)