A Time Remembered...the Bridge to the Beach 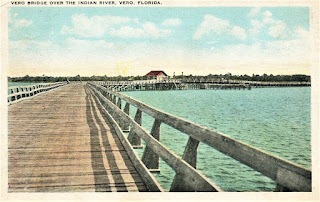 "Photography is a way of feeling, of touching, of loving.
What you have caught on film is captured forever...It remembers
little things, long after you have forgotten everything."
- Aaron Siskind

I love this picture.  Let me tell you about it.

This is the road that took us to the beach when I was a little girl.  We lived on the mainland and the beach was on the other side of the barrier island that skirts our section of the Florida coast.  My mother loved the beach so we crossed this bridge often.  Mama made it a point to listen to the radio in the morning so we could make it to the beach at low tide.  She often told me about how she and her friends would ride their bicycles across the bridge to the beach when they were teenagers.  It was truly her happy place.

The air was always salty and the breeze ruffled our hair as we drove along.  Since our cars had no air conditioning, in summer our windows were always open to catch whatever outside air was available.  When it was hot, the sun beat down on those planks and the bridge was really hot.  When it was cold, it was frigid.  It tells me a lot about my mom and her friends that they challenged this rickety bridge and its weather and winds on a bicycle!

Making the curve, we came to the bridge tender's house.  A family lived there, right in the middle of that bridge.  That idea fascinates me to this day.  Imagine living out there, always on the water with the rumbling of the cars going by! The house was next to the draw span, so that - at any hour of the day or night - the bridge tender could hear when a boat blew its horn.  The man would hustle out to the wheel that turned the draw bridge.  While the cars waited, the middle of the bridge turned to make an opening for the boat to pass.  Once the draw was back in place, we could proceed on our way.  Another short distance of bridge, and we were on the other side headed for the beach.

I'm thankful for pictures.  Certainly there are enough of them in the albums and boxes at my house!  But the pictures are simply the catalyst for memories of times gone by...of bridges to the beach and places beyond.  And I'm thankful for the times of my life that has produced so many pictures.

I am truly blessed to live where I do.  It's a joy to remember the little things.