Christ the Lord is risen today…Allelujah!


The pink padded album lay among the things I had received from my mother years ago.  The front says simply BABY.  I picked it up and carefully turned the pages.  Always before, I had given it merely a passing chuckle.  When I walked, when I sat up, what I ate and when I ate it had never held a lot of meaning for me.  This time I paid attention.  In Mom’s neat handwriting I found out a few things about myself.


There was the usual stuff one finds in a baby book…my progress through my first year of life and pictures of my birthdays complete with cake and candles.  There were little notes about my first car ride and our train trips to Texas and Illinois while Daddy was in the Army.  And then I saw a note that surprised and moved me.  In slanted script on the side of a page, Mom had written that I was christened on April 1…Easter Sunday, 1945.


Tucked in among the pages was something I had always overlooked: a yellowed clipping from the local paper giving details of the Easter service at Vero Beach Methodist Church.  It’s one of the beauties of growing up in a small town…the newspaper printed everything!  In this case, as part of a community drive related to the war effort, our church had exceeded its goal.  And there, in the middle of that short article, it says that Sierra Sue Kennedy (yes, that’s me!) was presented for baptism by her parents, Sgt. and Mrs. Purnell Kennedy.


Mom’s little notation said that Daddy was on furlough and we were home for Easter.  What did the world look like that April 1?  One might be tempted to make a joke about April Fool’s Day but that would be inappropriate.  It wasn’t funny.  It was a world of bizarre contrasts.  There was a war on and my father was in uniform.  My parents stood before God and the congregation and vowed to raise me in the nurture and admonition of the Lord.


Most of us have seen photos or film of that time: soldiers with guns and helmets in the midst of the rubble of a battlefield, military parades, and banners heralding the fighting in places never before heard of like Okinawa.  But in other parts of the world, Easter was celebrated as usual.  Googling that date, I found images of well-dressed women wearing furs and Easter bonnets strolling down Fifth Avenue in New York.  As those pictures proved, the war raged and yet life went on.  And on that Sunday morning, a one-year-old baby girl was having water sprinkled on her head in a white frame church on 16th Avenue in Vero Beach, Florida.


Thus began my journey with Jesus to His Cross and Eternity, though it would be years before my heart would begin to understand and accept its meaning for my life.  As I write this, it’s the beginning of Easter weekend, 2018. Sunday is April 1.  Since 1945, this Christian Holy Day has fallen on April 1 only once, in 1956.  It won’t happen again until 2029.  I would guess that of all the possible dates for Easter, April Fool’s Day is likely the most memorable!


How interesting and timely that I discovered the information about my baptism just months ago.  To consider the world as it was then and the world as it is now is both very different yet much the same.  Conflict still grips the world, though not on the scale of 1945.  The well-dressed women no longer wear furs, and there will be very few bonnets among the faithful ladies come Sunday morning.  Hose and gloves have passed from the scene, thankfully.  The biggest change is that my little white frame church was replaced in 1951 by a Spanish-style sanctuary.  Over the years, it has grown into a campus of classrooms and social halls.  The main thing, however, remains the main thing: the focal point of our sanctuary is the large Cross hanging on the wall above the altar.


Life moves on at a rapid pace.  But for me, the center point was set 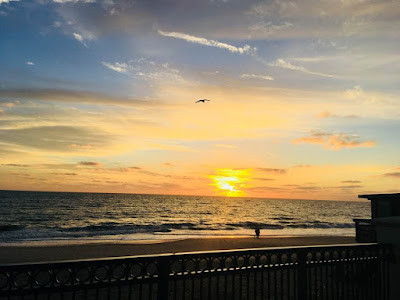