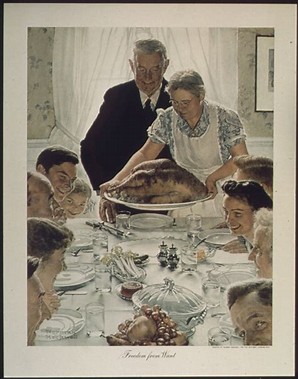 Enter into his gates with Thanksgiving and into his courts with praise:
be thankful unto him and bless his name.
Psalm 100: 4

It was a freezing cold, blustery day in Edinburgh, Scotland.  To the people around us, it was a regular Thursday in November.  To us, we were missing our national day of Thanksgiving.  In other words, we were missing that iconic gathering day when all of America comes together for wonderful, happy communion around...a turkey.

Whatever would we do?  We knew when we planned our trip that we would be gone over Thanksgiving Day but it didn't seem real until that morning.  We made our plight known to the kindly concierge at our hotel.  Could he recommend a restaurant for four lonely Americans?  Because, even though we knew it would not be the traditional turkey and dressing and cranberry sauce, we simply had to mark the day around a table giving thanks.  Because that is our custom.

Our custom.  Enter Norman Rockwell.  He painted his way into our national spirit.  Norman Rockwell said he painted life as he wanted it to be.  And his pictures made us want it to be that way, too.  This picture is called Freedom From Want.  It was inspired by President Franklin Delano Roosevelt in a speech before Congress in January, 1941, almost a year before Pearl Harbor.  The country had been gripped by Depression for more than ten years.  America was not yet at war, but it was coming.  In his speech, FDR listed four freedoms that he wanted every American to enjoy: freedom of speech, freedom of worship, freedom from fear and freedom from want.  Norman Rockwell depicted each of these in a series of four paintings.  The most well-known is this one.

His image of Freedom From Want means a table loaded with plenty and surrounded by smiling faces of all generations.  Grandma brings in the big turkey and is preparing to place it on the table.  Now notice that this table is not loaded with a lush banquet of a meal.  There are some stalks of celery, some other condiments.  The turkey is the centerpiece.  There is food enough for hunger but this is not a picture of gluttony.  Not only do we see the feeding of physical hunger, but the spiritual hunger of love embodied in family and friends.

When I look back on that Thanksgiving Day in Edinburgh, I'm reminded that our thanksgiving follows us wherever we are.  While we didn't have the usual symbols we associate with our version of the national holiday, we certainly had a happy meal.  Ed enjoyed pheasant, while the rest of us played it safe with salmon.  You never know what these strange fowl are going to taste like!  More than feeding our bodies, we fed our souls with the enjoyment of a happy time together.  I will forever be thankful for that travel time to those faraway places.

I hold in my heart other thanksgiving days that were filled with family, boisterous children, happy confusion and exhaustion from getting all that stuff together.  Thanksgiving Day 2001 is forever stamped in my memory because it was my father's last day of cognizance.  He passed two days later.  The last thing he saw was his family gathered around him.  Thanksgiving week three years ago was spent in a children's hospital while our grandson who was five at the time was tested for everything under the sun.  On Wednesday - the day before Thanksgiving - we got the final word...he was losing his hearing.  Devastating news and yet we were so thankful he was otherwise healthy and didn't have anything wrong with his brain.

Good times...and not so good times.  1 Thessalonians 5:18 gives us this direction:  In every thing give thanks: for this is the will of God in Christ Jesus concerning you.  I think it's important to note here that the word is not the combination everything.  It's more emphatic: every thing.

Norman Rockwell said he painted the world the way he wanted it to be.  He gave us wonderful images and poignant, happy thoughts.  But Norman Rockwell wasn't running the world.  It's not always going to be the way we want it to be.  But we are to find things to thank God for, whatever the situation.

As a child in Sunday School, one of the first scriptures I learned was this verse from Psalm 100 and the only way it ever sounds right to me is from the King James Version:
Enter into his gates with thanksgiving, and into his courts with praise: be thankful unto him, and bless his name.  For the Lord is good; his mercy is everlasting; and his truth endureth to all generations.

Whatever your thanksgiving situation is, I wish you freedom from want...a peaceful day with time to count your blessings and thank the One who guides your life.  Enter into his gates with thanksgiving and into his courts with praise!