You Can't Run Away From the Storm 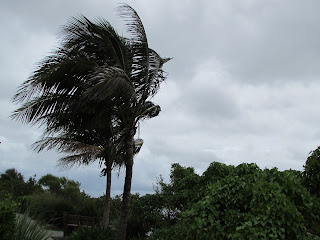 When a gentle south wind began to blow, they thought they had obtained what they wanted; so they weighed anchor and sailed along the shore of Crete.  Before very long, a wind of hurricane force, called the "northeaster," swept down from the island.  The ship was caught by the storm and could not head into the wind; so we gave way to it and were driven along....We took such a violent battering from the storm that the next day they began to throw the cargo overboard....When neither sun nor stars appeared for many days and the storm continued raging, we finally gave up all hope of being saved.
- Acts 27: 13-15, 18, 20 NIV

The Apostle Paul was being taken to Rome for trial before Caesar.  Before they knew it, the storm was upon them and they could do nothing but ride with it.  They saw no sun or stars for many days...had nothing to guide them or give them any point of reference for life.  They thought they were doomed to death.  They couldn't get away from the raging wind.

In Paul's day, they had no means of forecasting a storm.  Two weeks ago, our media began the alerts which became more and more serious with each one.  Hurricane Irma was huge and it was powerful.  And it was headed straight for Florida.  We had just seen Hurricane Harvey devastate the east coast of Texas and our fears for our safety grew with every advisory.  Ed and I began to seriously discuss evacuating as we prepared our house for the blow.  Our concern was not only for ourselves but for his mother.  At 93 with congestive heart failure, Mom did not need the stress of riding out a hurricane that could eventually have us treading water in the living room.  While we had always stayed home, this time we needed to GO.

Irma was due to come ashore sometime Sunday.  Thursday morning we were in our car with Mom by 9 a.m.  Knowing that every interstate would be a bumper to bumper rolling parking lot, I had mapped out a route of good alternate roads that would get us to Georgia.  With difficulty, I had found rooms for one night in Albany, GA.  From then on, everything was booked well into the next week.  All day, we worked our way north and west because we thought that would take us away from the path of the storm.  The forecasters were guessing it would come up the east coast of Florida.  It didn't.  As it turned out, we were running ahead of it.  We arrived in Albany at 10 p.m. after spending the day on roads where gas stations had no gas and the ones that did were swamped with hungry vehicles and desperate people.  I can't even imagine what it was like on the interstates.  There are so many stories to tell and they will be told some other time.  Suffice it to say, nerves were tense and bodies were getting more and more fatigued as the day ground on into night.

And the storm was coming on, like a great monster, and changing its course with every new bit of news.  Friday's ride was more pleasant because we stayed on the west side of Georgia even though that was a long way around to get to our destination.  We were heading for our daughter's home in Tennessee.  We spent the next week there, watching the Weather Channel and checking Facebook for news from home.

The lesson is this...even though we were out of the brunt of the wind and rain, we were still tied to the storm.  It held us, like a terrorist holding a hostage.  When could we get out of this mess?  Would there be anything left once we broke loose and got back to the base of our life?  Our trip home a week later was less frantic and yet exhausting because we pushed hard to get back to our familiar surroundings.

Whatever the storm...whether it is a real live hurricane or something grinding away in life on a personal level...there is the bad blow and then there is the aftermath.  And wherever you are, you have to deal with it.  You can't get away from it.

Our Florida hometown is a very green little city.  We have one set of tall buildings on our beach but everywhere else the town is full of trees and lovely landscaping.  Right now, much of that is debris lying in piles along the streets and turning more and more brown every day.  The aftermath...the consequences...the stuff that's left to deal with once the storm has torn it all loose from its roots.

Hurricane Irma taught us that leaving is just as hard as staying.  The night we got home, I told my brother that if I ever evacuate again it will be to Maui.  As I lay in my own bed - thankfully! - later that night, I thought "That's not far enough."
Newer Post Older Post Home