The Gracious Hand of God 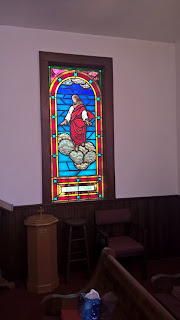 
I had a faith breeze aha God thing happen recently and I think when those things drop into your life you need to share it.  I saw an old friend and as we shared what was happening in our lives, she gave me a thought that stuck with me.  And that’s a good thing because it was going to appear in my Bible reading very shortly.


She asked me if I was still doing the devotions at these lunches.  I assured her that I am and invited her to come.  She shared with me that she had recently been asked to give the devotion where she works.  When she asked God what he wanted her to say, she got the message: faith without a backup plan.  Think about it, she said…having faith without a plan B.


“Diane,” I said…”I’m stealing that.  You’ll see that again real soon.”  A few days later, following our church’s Bible reading plan, I dug into the Book of Ezra.  It’s a short book and I read it in one sitting.  As I worked along and got to chapter 8, I came to the part where the prophet Ezra had received permission from King Artaxerxes to lead a group of refugees from Babylon to Jerusalem to restore the house of God to its position in the kingdom and to return the precious gold and silver items that had been stolen when the temple was destroyed.  And I was just sort of letting the story run along in my brain when I read this in Ezra 8:21: Ezra is speaking…


There, by the Ahava Canal, I proclaimed a fast, so that we might humble ourselves before our God and ask him for a safe journey for us and our children, with all our possessions.  Verse 22: I was ashamed to ask the king for soldiers and horsemen to protect us from enemies on the road, because we had told the king, “The gracious hand of our God is on everyone who looks to him, but his great anger is against all who forsake him.”


My brain popped to attention.  Read that again!


Since he had so firmly declared God’s protection, Ezra was embarrassed to ask for man’s protection.  So there they went…off on the journey loaded with gold and silver possessions to dress the house of God.  And their only protection was the hand of God.  That’s faith, baby.


You know, there are plenty of verses that tell us to have faith…to trust…but sometimes we need to be shown what that looks like.  Here it is, in black and white on the page.  Ezra had told the king that the hand of God was on them and so he proceeded in that protection.  He asked nothing more.  He didn’t say, “Well the hand of God is on us but just in case we are beset by bandits we better have an armed escort.”  Now don’t think that I’m saying that we should not be smart about protecting ourselves with the available security…say at the mall.  The story is not telling us to be stupid.  But when we declare we are going to trust the gracious hand of God, then trust it.  I believe that if we need to go from Plan A to Plan B, then God will make that clear and show the way.


Is there anyone in this room who is not having to walk by faith in some area of your life today?  Please raise your hand if your life is so well-ordered and safe and sound that you are not having to trust the gracious hand of God for anything.  I want to see what somebody like that looks like.  As the great comedienne Gilda Radner was known to say…”It’s always sumthin’!”  In our family, we have so many sumthin’s it would be overwhelming if we were not trusting God to walk alongside us and show us his path…his Plan A.  It’s likely that any Plan B would be a plan of my own fixing and direction and we would be off in the weeds in a matter of minutes.  I know, because I’ve battled those weeds of my own making far too many times…and God help me I likely will again.


Faith without a backup plan refers to those times in life when we look at a situation and say, “I have no idea what to do here but I know God does so I’m leaving it up to him.”  As we make the first step, counting on that gracious hand of God, we can see where to make the next step and then the next and so on.


Remember: the gracious hand of our God is on all who look to him.


Pray:  Lord of all strength and power, we sit here under your mighty gracious hand.  We come to you thanking you for your love and care.  We have so many needs, so many concerns and so many praises.  Hear them all, Father, and touch each one with love and compassion.  May we seek only to serve you and bring you glory as we carry your cross in a hurting world.  I pray your blessings on each woman here…in the name of your son, Amen.
Newer Post Older Post Home