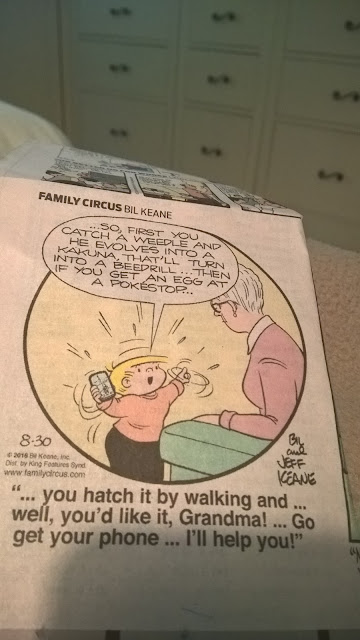 I'll bet you've heard these words from your grandchildren.  "I want you to play this game with me.  I'll show you how to do it!"

God bless the grands.  They've been with technology since the first day they drew breath.  It's second nature to them.  The gap between them and those of us who grew up struggling with the multiplication tables is so vast that it's almost impossible to cross over.  I used to think that mastering nine times five is forty-five was a huge accomplishment and would take me far.  Then along came New Math and I was supposed to get on speaking terms with rings and fields.  Don't ask me what that is...I don't know.  They tell me that was the forerunner of the computer age.  I am totally lost.

All I know is that we now have these games of far out fantasy with strange characters that are played on a video screen with a wand you hold in your hand and control what goes on in the game.  My grands don't understand why all of us don't get it.  I've tried.  I don't.

It was a chilly, rainy day in Tennessee...a day for playing games inside.  OK, I thought.  I'm going to learn what they do with this game.  Andrew, Jack and I plopped ourselves in front of the TV in the basement.  They gave me my wand and a cursory explanation of what it did because of course it's so simple anybody's brain can pick it up with no trouble.  Right.

They turned it on (I couldn't even do that) and little people in a scene of battle appeared on the screen.  They moved around with the speed of light.  My eyes don't see that fast.  "That one's yours, Mimi."  Which one?  They all look alike.  And what are they fighting for?  What's the object here?

"They're the blah blah blah and you want to keep them from yada yada yada."

Excuse me, are you speaking English?

I looked.  It was nothing but squiggly lines and icons I could not decipher.  I would hit C if I knew where it was.

"You and Andrew will have to play this one.  When you're ready for Go Fish, call me."