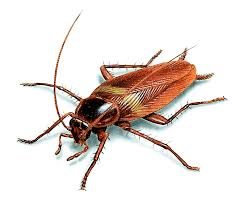 Let me set the scene: My room on the fourth floor of our local hospital, the night following my surgery.

Judy and I were having our version of a sleep-over.  When you're 60+ years old, your sleep-overs are held in places like hospitals.  She was making every effort to find some comfortable spot on the recliner and I was in and out of goofy-land, still dealing with the effects of anesthesia.

In one of the rare moments that we were both settled and quiet and ostensibly sleeping, the door opened, the lights flipped on and the poor nurse came in for the requisite check of my vital signs.  It was well past midnight...that no-man's land of who-knows-what-time-it-is.  Nurse was most apologetic and we tried to be nice.  Since she was already there, I decided I should potty.  I pushed myself to the side of the bed, put my feet on the floor and stood up.

I looked down, straight into the face of a huge cockroach.  He had obviously been disturbed by the sudden light.  The next few minutes rival anything ever filmed for a slapstick comedy.  The nurse jumped back, announcing that she couldn't do roaches.  The first aide ordered "You watch it and see where it goes.  I'll get something to kill it with."  Yeah, right.  That was roach's cue to make a move, heading straight for Nurse.  All the while, Judy added exclamations of disgust for the whole scene.  I simply sat back down on the bed and waited for it all to be over.

Roach ran straight ahead, then skirted the wall and headed for the bathroom.  I'm sure he had never heard such bedlam in his short life.  Aide 1 returned with Aide 2 just in time to head the scoundrel into the confines of the bathroom.  There followed at least five minutes of "Where is he?"  "I've got him...Nope...he's coming at you."  Wham...blam...whack...And then...silence.

The offender was dispatched to his eternal reward and flushed down the toilet.  Nurse and Aides defended their territory, saying the creepy thing had to have come into the hospital on somebody's shoe or clothing or in a box.  Whatever.  Judy continued to spit and sputter.  Me...I just laughed, after I finally used the potty.

There is a time for everything, and a season for every activity under heaven...a time to weep and a time to laugh...
- Ecclesiastes 3: 1 and 4