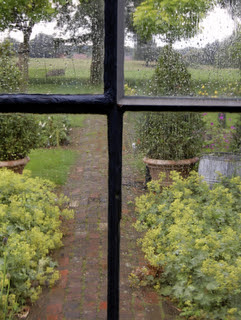 The sign said: “Don’t wait for the storm to pass. Learn to dance in the rain.”

It hit me where I live, and the thought stays with me. We all have rain, every day. Do we grab our umbrella and walk in it, or do we cozy up in the house and hope the storm will pass quickly? Is this storm any worse than any others? Will I be okay when it’s over?

JR Martinez was one of the three finalists on Dancing with the Stars. He was disfigured by a land mine in . The burns took his hair and his left ear and made his face a mass of scarred skin. Like any of us would be, he wanted to die. His mother assured him that when people saw what he was inside, they would love him.
She was right. He began to speak and encourage others who were in the midst of pain. He has since played a role on a soap opera and proved to be an agile, expressive dancer with his partner, Karina. The fans loved him. Every week, he faced the judges and listened intently to their critique. And he smiled and wave to the cheering fans.
JR dances in the rain. And he says the rain has made him a better person. Even more than that, he says he wouldn’t change a thing.
And by the way—he won that dancing competition!
Newer Post Older Post Home